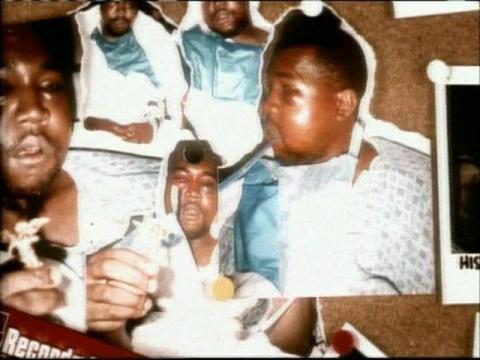 The title of this article might be terrible. Or it might be great. I don’t know, maybe someone will tell me?

I was trying to mix in the title of a book I recently read. The book is called “Show Your Work” by a guy called Austin Kleon. I highly recommend the book. The message is pretty simple, in showing your work, you achieve a number of things:

Sure, the “outcome” of your work is important. But, for many, there is as much art in process as there is delivery. Your train of thought is a journey unique to you. This is worth sharing because NOBODY is on the same ride as you. The words you cross out, the lines you can’t bring yourself to say, the fear you want to hide from everyone, the self-doubt, the arrogance, the inspiration. All of it can be shared. A lot of it should be.

I’m a huge believer in this.

There is no greater example of this than what Kanye West has achieved with The Life of Pablo. Philosophy in motion.

It doesn’t matter if you like him or not. Shut your ego up for a second and appreciate the art of sharing.

Here is a list of just some of the things he shared on route to Pablo’s release:

1: He changed the album title at least 5 times (So Help Me God, SWISH, Waves, The Life of Pablo). He would tell us the album title changed, but there was no real explanation as to why.

2: Before the Madison Square Garden Yeezy Season 3 show, he Tweeted a whole range of photos from the new collection.

3: He Tweeted out lyrics, doodles and the album’s tracklist multiple times.

4: He showed who he was inviting to the Yeezy Season 3 launch with messages from his phone.

5: He even took photos of the material he was going to use for merchandise stands.

6: He gave references to samples and other artists that were going to be on the album.

7: He told us why it was being delayed.

9: He told us it’s still in progress.

10: He streamed the album live via Tidal as part of the Yeezy Season 3 show.

11: He started releasing singles over a year ago (Wolves) and then more recently Real Friends (my favourite track) and No More Parties in L.A.

12: He’s since gone on some notable Twitter rants, providing context around his inspirations and experiences through these last few weeks.

Everything he was sharing got me even more hyped for the album. By the day of release, I activated push notifications from his Twitter account because I wanted to listen to the album the moment it was released.

I fell asleep and was 8 hours late to the party. Shit.

This isn’t new from Kanye. 2 years ago he posted the lyrics from Blk Skn Head. 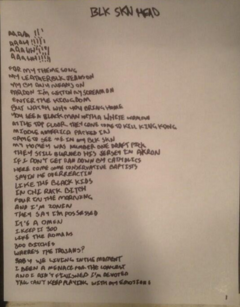 If you have the opportunity to play this game of life you need to appreciate every moment. a lot of people don’t appreciate the moment until it’s passed. – Kanye West

I  got lost for about an hour in the middle of writing this piece.

Take a look at this 2014 Vice article where they jump into the archives of Kanye’s old blog.

I started to think about when he broke his jaw and went on to release the Through The Wire video. EVERYTHING in the that video his Kanye sharing his process, his ideas, his story, his experience. This was back in 2003!

It all creates momentum. A flywheel. A story.

He feeds his ecosystem constantly and then taps into its resources sparingly.

This also got me thinking about Beyoncé’s self-titled 2013 album. The one she released without any announcement or promotion. That album was hugely popular but, that strategy is not sustainable. I’d surprised if her team ever does that again. She really milked her fans loyalty for that album. Is it any surprise that in the years since she’s taken a much more Kanye approach to her promotion? Go take a look at her Instagram. You’ll see around 20 Super Bowl rehearsal photos. She’s showing her work in progress. She’s not committing in the same way as Kanye, but there’s no doubt that he has inspired this new wave of marketing.

Kanye’s efforts resulted in me tuning in for a fashion show. Something I have never even considered before. I am sure I am not alone. I didn’t care for the fashion all that much, but I wanted to part of the experience. I wanted to know how the next chapter was going to play out. I enjoyed this new experience along with the rest of hundreds of thousands of Yeezy Season 3 viewers.

I felt invested in the story of Pablo because I was aware of the process and all of the touch-points along the way. Investment = anticipation. Once you have invested anything, be it money or time or energy, you feel a closer connection to it.

Kanye bridged the gap even further by live streaming his unreleased album to the world at Madison Square Garden. Live work in progress.

It’s still imperfect. The Life of Pablo has already seen three notable iterations. The nine-track version played at MSG. The $20, 18 track version released and swiftly removed from TIDAL and the current version available on Tidal which Kanye has already hinted only being partially finished.

Kanye is updating this album on the fly.

The Life of Pablo isn’t just a narrative that has spanned two years, fashion and hip-hop. It’s a simultaneous culmination and continuation of 13 years of storytelling.

No Church In The Wild.

I suspect that Pablo has become Tidal’s greatest lead generation tool to date.

In November, Kanye appointed Pusha T as the president of GOOD Music. One of the hardest things for creative people to do is to delegate. This has likely been a key move in allowing Kanye to push forward with the release of Pablo and his work on the MSG show. Trust like an artist.

I want to action more and save less for myself. People say that Kanye has an ego. He does. But, who is more egotistical – the person willing to share their work, or the person unwilling to share anything until their own “standards” have been met?

I want to show more of my work. It’s the only way to have more work to show. It’s the easiest way to free yourself of your ego. EVERYONE can take inspiration from Kanye West’s emotional scrapbook.

Here’s the part I loved the MOST so far. During the show at MSG, Kanye screened footage from his unfinished Donda video game.

He started smiling, looked up to the screen and told the audience he had something he wanted to share.

Then, we’re greeted with an image of Kanye’s Mother who was depicted as an angel flying through the skies, navigating her way to heaven. It was strange as shit. It was bright. It was vivid. It was another touchpoint.

I looked over at my girlfriend. She was leaning forward, staring at the TV.

She looked at me and said, “Do you think he’s actually gone mad?”

“It’s probably exactly what he imagined”.

In that moment, I was embarrassed because I don’t have that same level of creativity.

Of all the emotions that you can make someone feel, surely anticipation is the hardest to provoke?

Put enough of yourself into the world so that you develop your own ecosystem.

Starve your friends, family and fellow artists occasionally. Live from your reserves.

Then give them the feast of their fucking lives.