I Tracked the #hiphop Hashtag on Twitter for Over 2 Years. Here’s What I Learned.

Home / Articles / I Tracked the #hiphop Hashtag on Twitter for Over 2 Years. Here’s What I Learned.

I Tracked the #hiphop Hashtag on Twitter for Over 2 Years. Here’s What I Learned.

In hindsight, this was a dumb thing to do.

Over 2 years ago I started tracking the #hiphop hashtag on Twitter. It’s been so long that I forgot my exact intentions when I started tracking it. I think I was just curious to see who was using the hashtag most frequently and what else I could learn about what people were posting.

To get as much information as possible, I used the paid hashtag insights service Hashtagify.me. I signed up at $6ish a month to track the hashtag.

Then, I forgot about it.

Occasionally, I would spot an email and think “shit I need to check and cancel that”.

Then I would forget again.

About a year ago I offered the data to HIPHOPDX and after a few emails, they didn’t get back to me.

About 4 months ago, I finally decided that enough was enough, I needed to cancel the service. However, I didn’t want my money to be completely wasted. At very least, I wanted to see the data I had collected for nearly 2 and a half years.

I logged in to hashtagify.me and the site crashed.

Eventually, I emailed their support team. The problem? The #hiphop hashtag that I had been tracking had collected more data than anyone else that uses their service.

I was very lucky. After about 50 different attempts at collecting the data, it eventually all loaded. I was scared to turn off my computer and so I kept it on for a week and a half. I took a bunch of screenshots which all feature in this post.

I haven’t been able to load the data again, since.

128.77 BILLION total impressions. That’s the total number of times Tweets containing the #hiphop hashtag would have been viewed.

In summary, this data shows that the #hiphop hashtag is used very frequently, has great reach but, perhaps is not used by as many daily users as you might expect.

The first dial above shows the sentiment of the #hiphop hashtag. In short, this looks at a range of keywords that are used in conjunction with #hiphop and decides whether they are positive, negative or neutral in sentiment. At 85% positive, the sentiment surrounding this hashtag is hugely positive.

I was pleasantly surprised by this, as there are so many negative things often associated with hip-hop. I thought it would be a lot more neutral.

One possible explanation for the sentiment being so positive is that a lot of people using the hashtag are promoting their own work (music, blogs, clothing etc). As you’ll see later in the article, this theory is perhaps justified as we can see that a small selection of users are heavily using the hashtag in conjunction with Tweets about their own music and services.

The engagement dial considers all of the Tweets containing the hashtag that were either Retweeted or received a reply via an @mention. I think 57% engagement is actually pretty high considering the number of Tweets that are sent out on a daily basis. However, what I have also found whilst undertaking this research is that there are a lot of people who appear to be using automated software within the hip-hop community on Twitter. A lot of people appear to have set up automated Retweets for some of the frequent #hiphop hashtag users referenced later in this post. So in short, I am pretty confident that the engagement rate is inflated by the use of marketing automation in this culture. “Marketing automation” in this sense, is just spam.

As a side note, having previously used a lot of automated Twitter tools in the past I can say that hip-hop artists and professionals were using this type of software really early in comparison to other industries. This is not necessarily a good thing, though.

What this seems to have sparked, particularly over the last two years, is a wave of artists and publicists on Twitter who are excessively self-promoting through automated Twitter tools.

Just one personal observation is that for me, this has actually devalued the importance of the #hiphop hashtag over time. I remember joining Twitter back in 09/10 and I used to have a feed set up to monitor people that were using #hiphop. I used to use this as a way to curate and keep track of all the key things in the culture. Now, I don’t use it at all because of all the automated Tweets and self-promotional spam.

This is not a complaint, as I too have been guilty of contributing to the spamming of this hashtag in the past. This is just an observation of how much my own use and behaviour on Twitter has changed as a result of it’s increasing popularity.

I did a little research and honestly, I have no clue why this was such a popular day.

If you’ve got any ideas on what happened in hip-hop around this time that may have caused this spike in hashtag use, please do drop me an email.

On 22nd January 2014, more unique users than ever used the #hiphop hashtag.

Why? Again, no idea. I am terrible at research. I told you this was dumb.

This was around the time Miser Cee spoke with GQ magazine about being gay, or bisexual… or something.

I don’t think this was huge news, though.

The Most Positive Day in Hip-Hop?

I still don’t know what happened that day. I am gutted I missed it.

Lots of people were using the #hiphop hashtag and apparently, it was a pretty damn good day.

The Most Negative Day in Hip-Hop?

What happened this day?

GZA penned an open letter to hip-hop, noting that lyricism has gone.

Also, XXL released their 2015 Freshmen cover. Each year, the conversation on social media regarding this list gets more intense, and unsurprisingly there are a lot of people who don’t agree with XXL’s choices.

This years xxl freshmen class is so waste

the xxl freshmen class this year is so disappointing.

the xxl freshmen class this year is so disappointing.

Most Active Days and Hours

With a normal hashtag, the heatmap above would show us the days and times of the week when the #hiphop hashtag is most used.

Unfortunately, I think I broke the tool. I included this just because it made me smile, and it shows just how often this hashtag is being used. 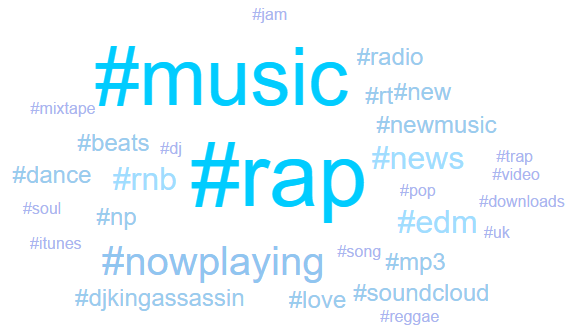 This hashtag cloud shows the most frequently used hashtags alongside the #hiphop hashtag.

As you’d expect, there are lots of hashtags for associated genres of music.

It’s somewhat interesting to see #soundcloud appear. This is just a guess, but I suspect a lot of the users who are using automated Twitter tools are also using similarly available automation tools for Soundcloud. I suspect that these users are trying to direct people on Twitter to their Soundcloud profiles where they are also spamming the shit out of stuff. 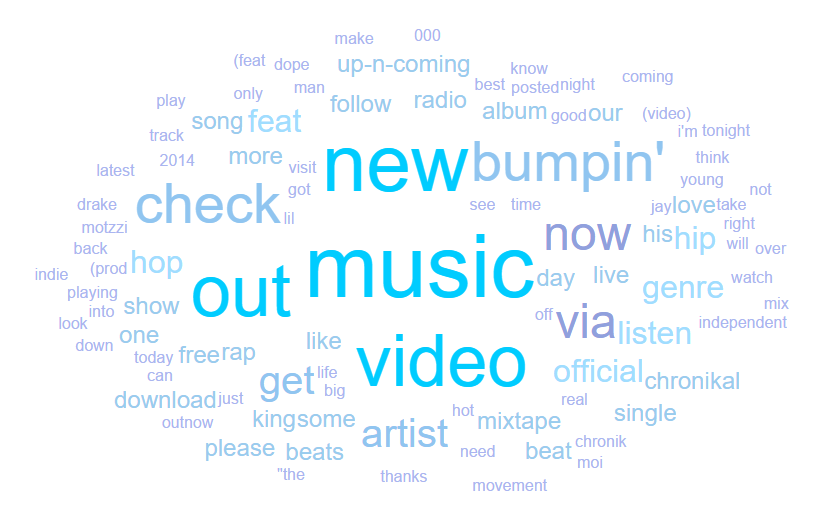 There’s a lot of further evidence here to suggest that users using the hashtag are mostly self-promoting their own music (get, new, single, listen, independent, up-n-coming, free).

At least they say “please”.

It’s interesting to see “Chronik” feature here. Chronik is a UK based MC. I’m guessing he or his team have used one of the available automation tools.

The one I was most surprised by was bumpin’. That made me feel uncomfortable inside.

I can’t lie. I remember sending out Tweets about music I was bumpin’.

Fuck, that feels horrible to say.

Ok, so, WHO has been using the #hiphop hashtag the most? 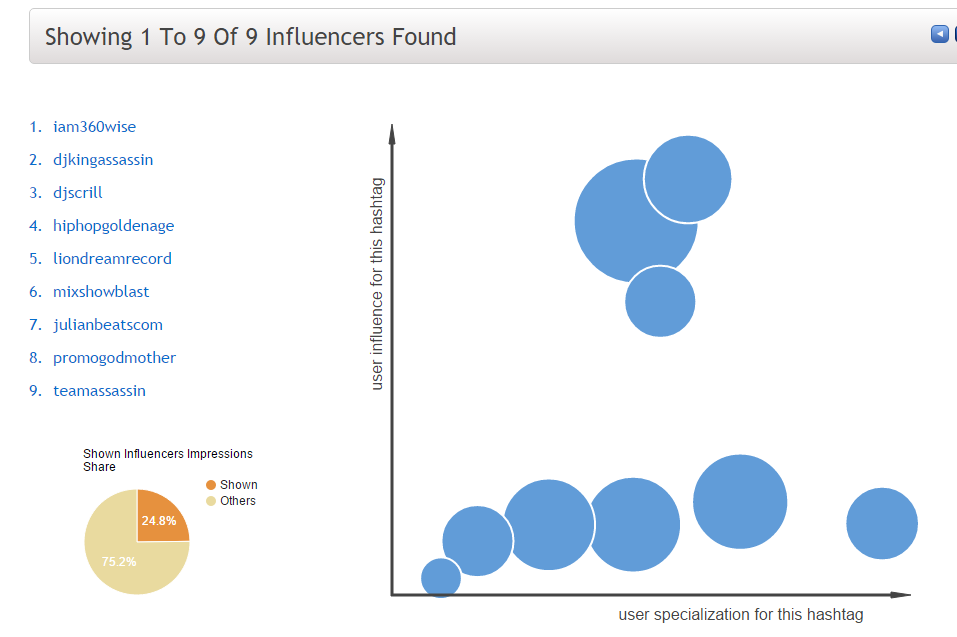 Anyway, here we can see the users who over the last 2 years or so have most frequently Tweeted using the #hiphop hashtag.

The only user I was really familiar with from this list was @djkingassassin. So, it was particularly interesting to see that @teamassassin also featured in position number 9.

I am not entirely sure what has happened. My guess is that either @djkingassassin built up a Twitter account and sold it, OR he was banned and the account was later made available and taken over by the BronxTwins.

These 9 users hold a huge 25% collective impression share for the #hiphop hashtag.

So, let’s take a look at these guys in a little more detail.

Before I get into this, I should note that I haven’t included all the data I have for each user detailed below and I won’t break down every single metric that’s referenced.

However, you should know that the terminology “on target” and “off target” references engagement. So, if a Tweet was sent and nobody engaged with it, that’s off target. If a Tweet results in a retweet or an @mention, it’s considered “on target”. 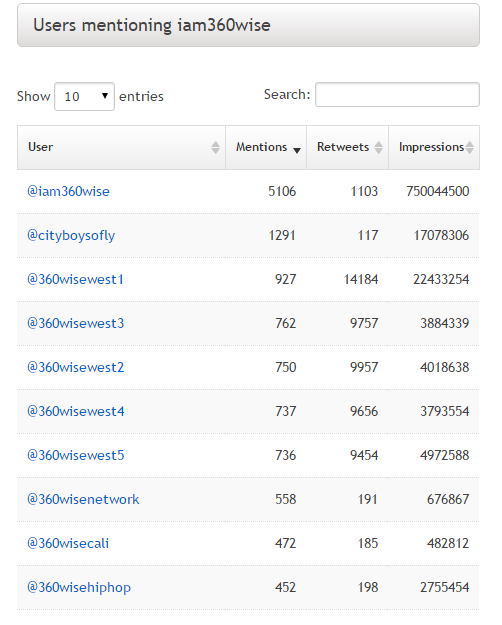 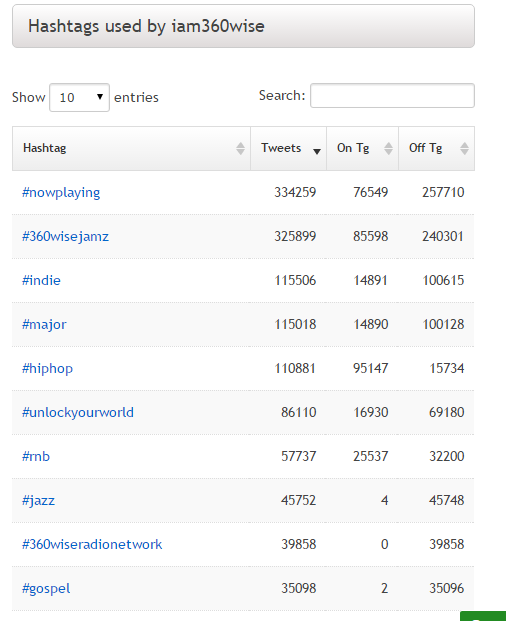 I won’t go into all the details for this one, but it’s clear to see that our friend @iam360wise was automating all of their Twitter activity and had several accounts set up to mention each other and promote their own music. 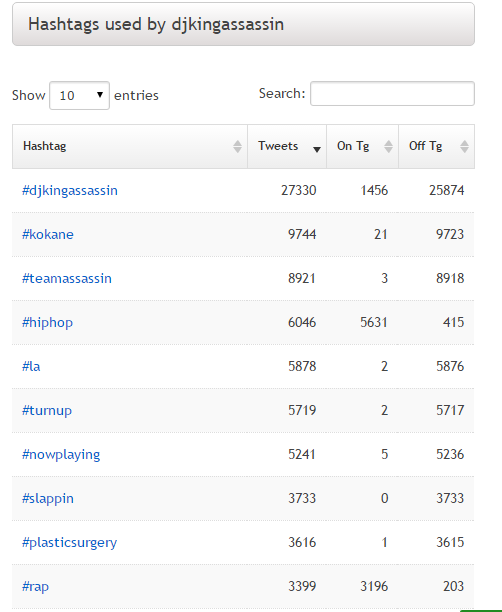 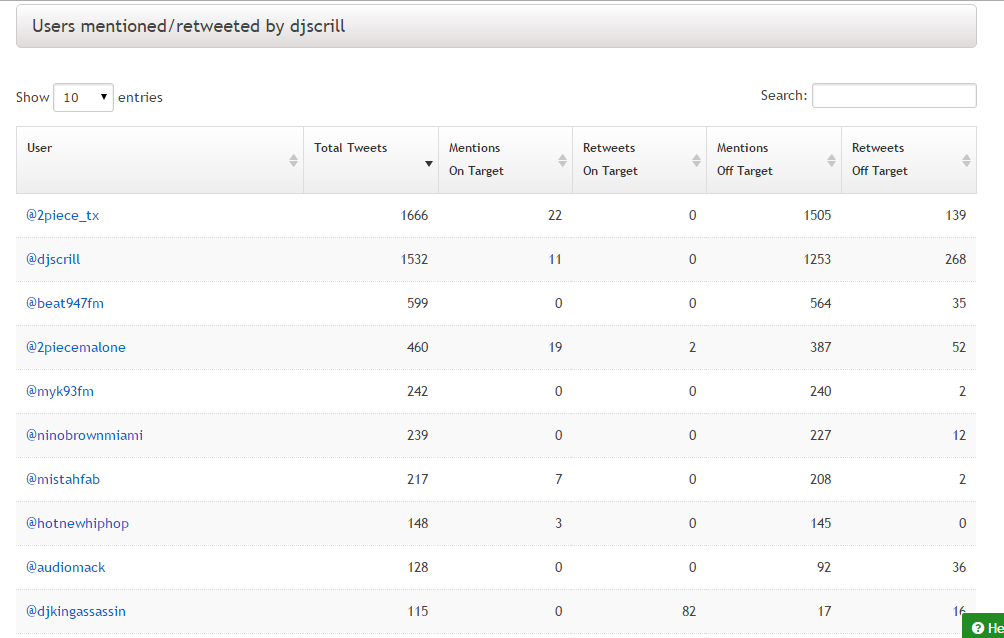 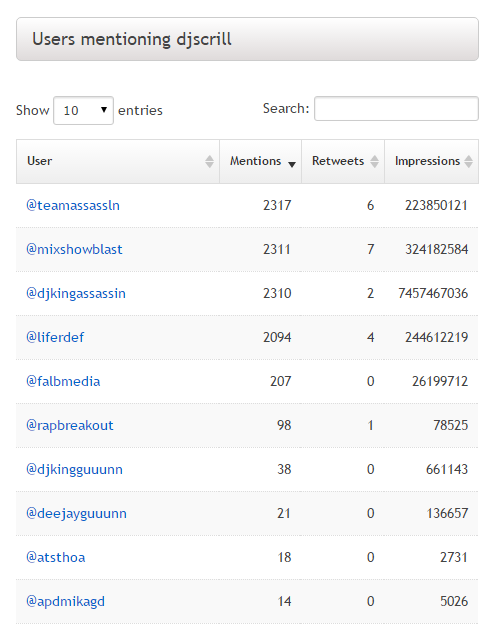 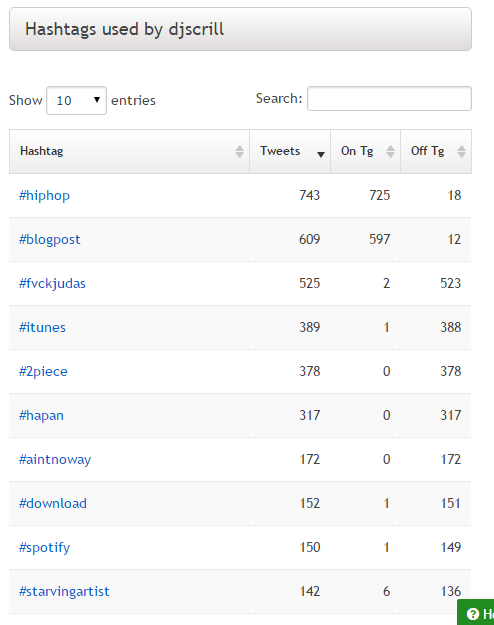 It would appear from the data above that it’s reasonable to assume both @djkingassassin and @djscrill know each other and are working together. 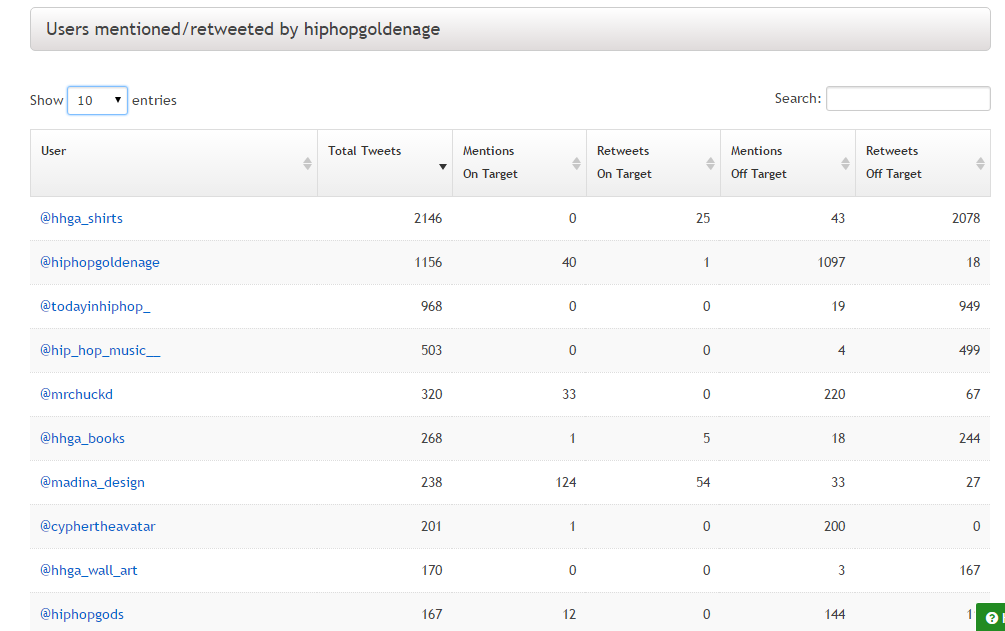 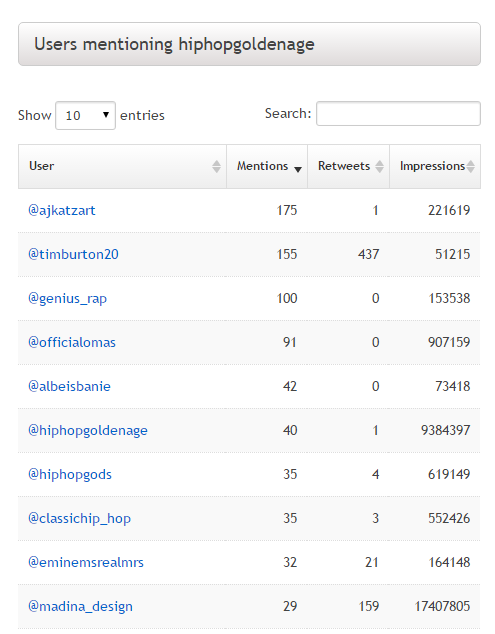 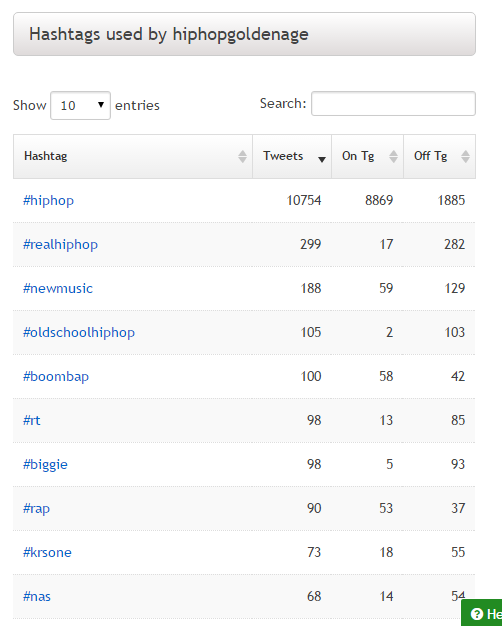 It would seem that hiphopgoldenage also took the mass, automated strategy with several other branded accounts all mentioning/RT’ing each other. 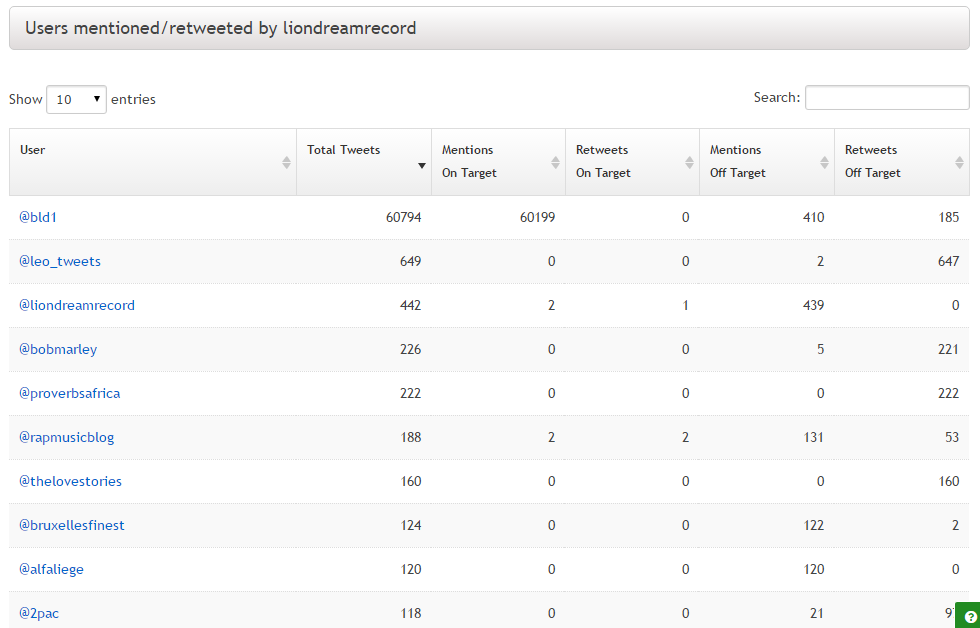 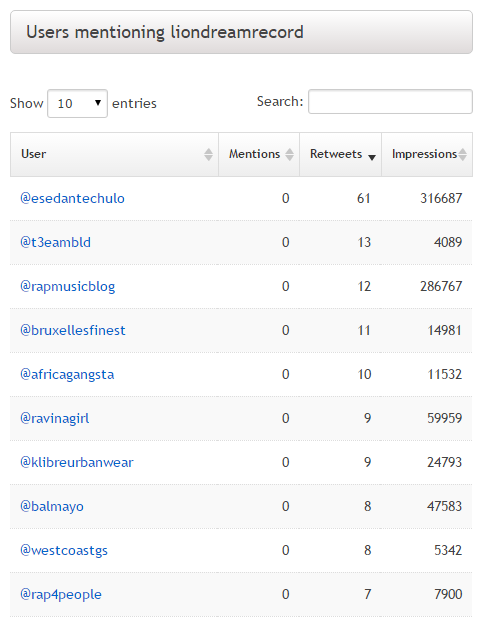 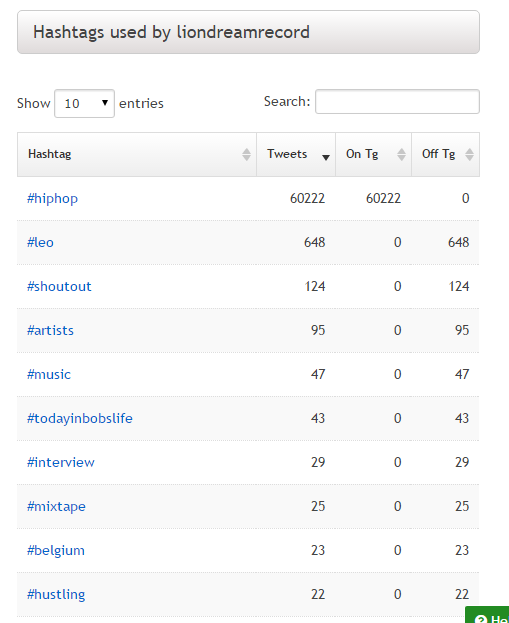 Nothing too interesting here. Just crazy mad spamming of the hashtag. 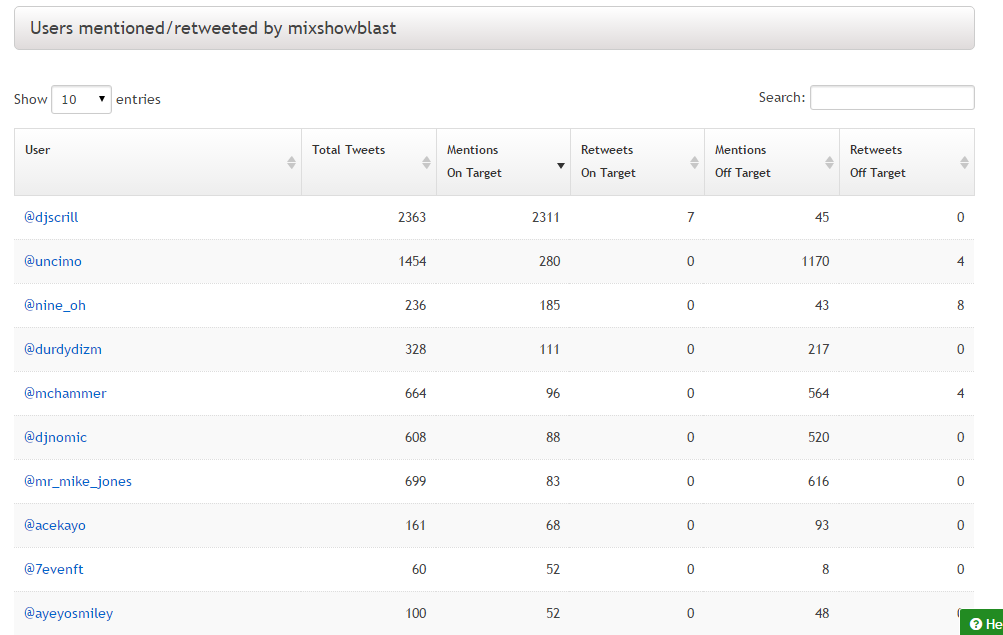 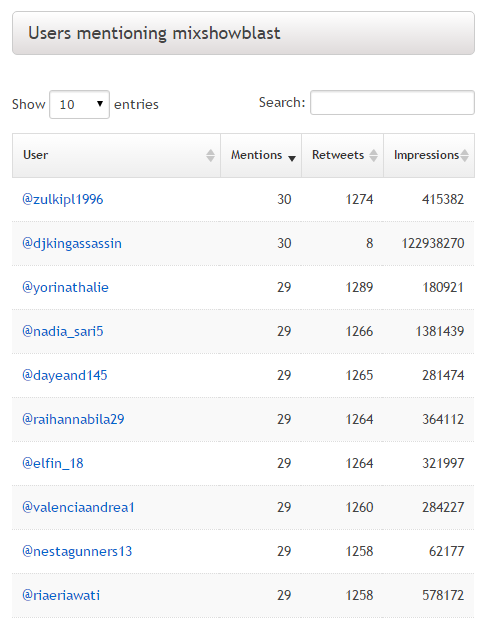 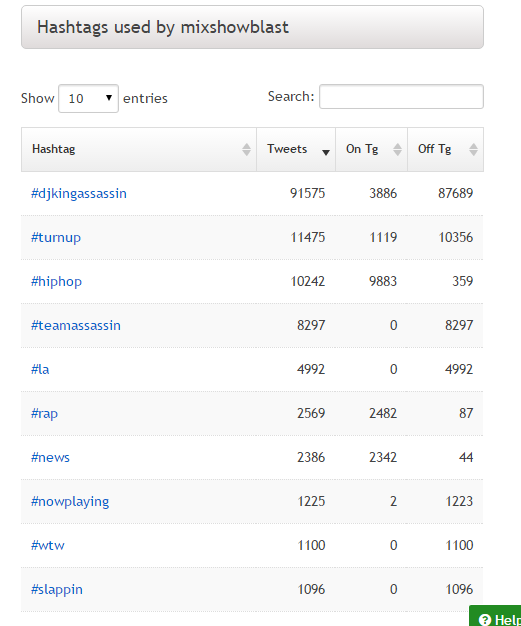 Interesting, both @djscrill and #djkingassassin appear once again. I haven’t looked into this but I suspect @mixshowblast is also an account owned by djkingassassin. 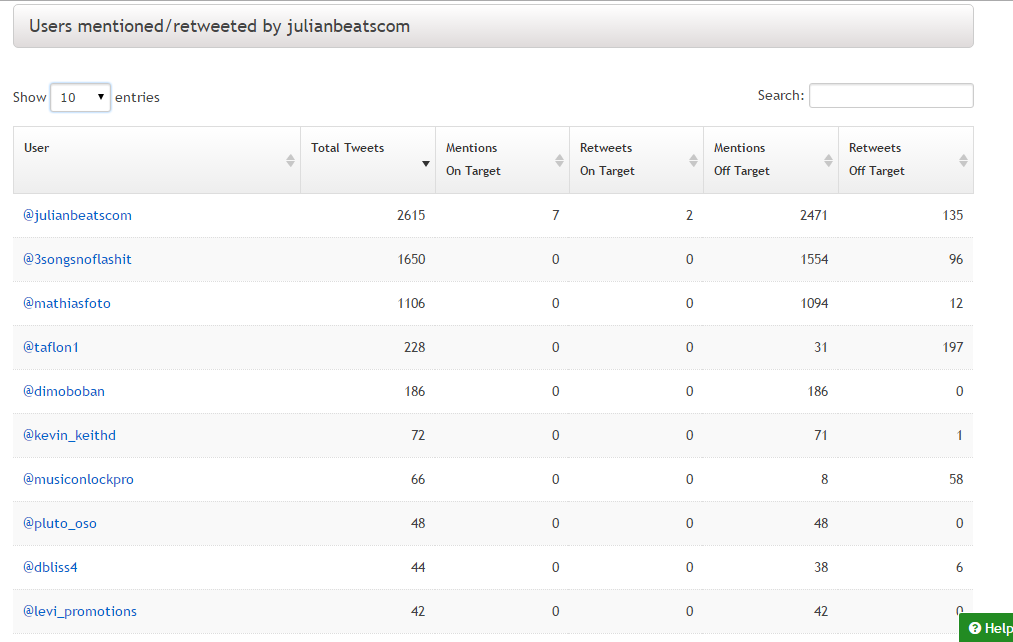 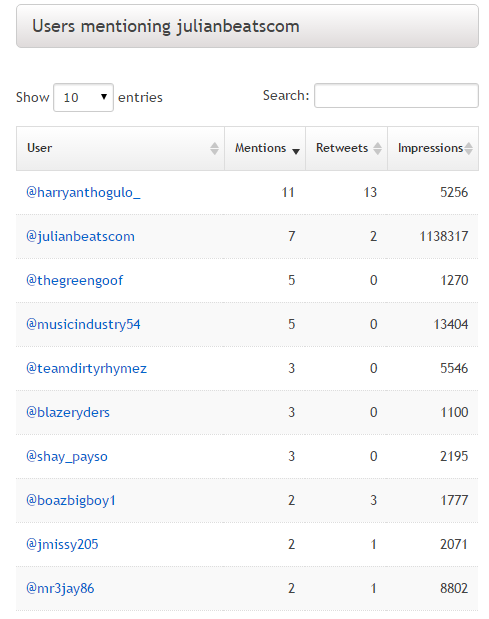 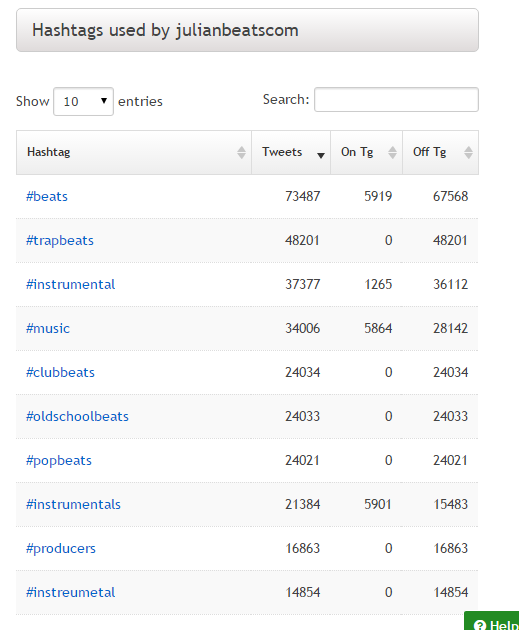 Nothing too crazy here. Again, looks most likely this is a producer who is using the #hiphop hashtag as a way to spam promote their beats. 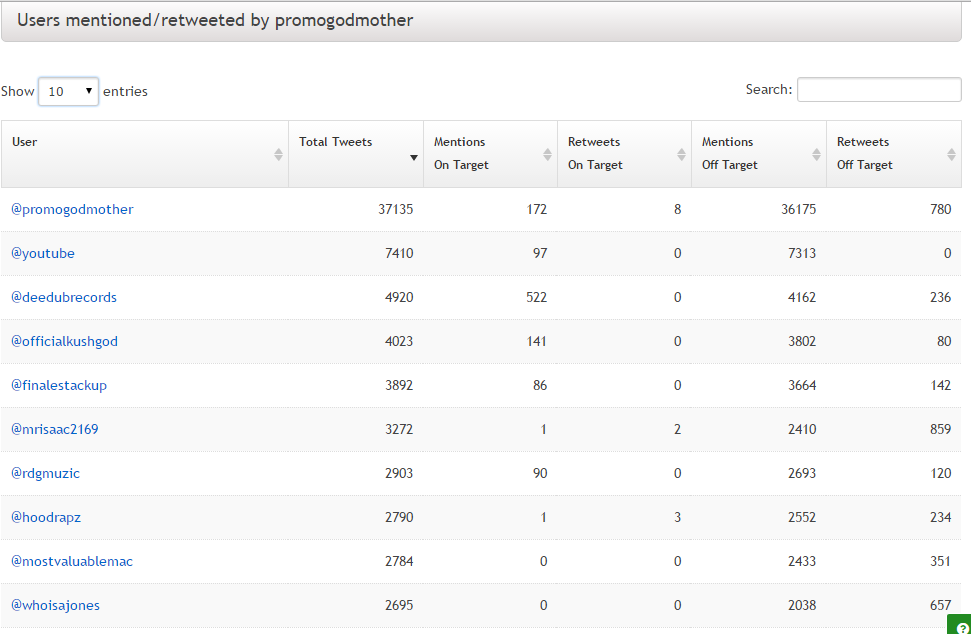 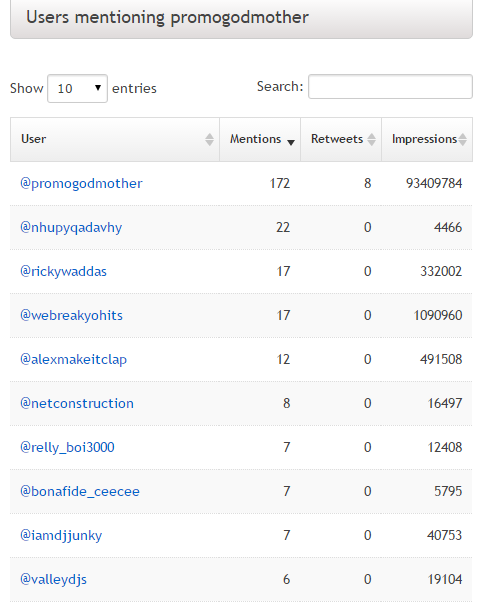 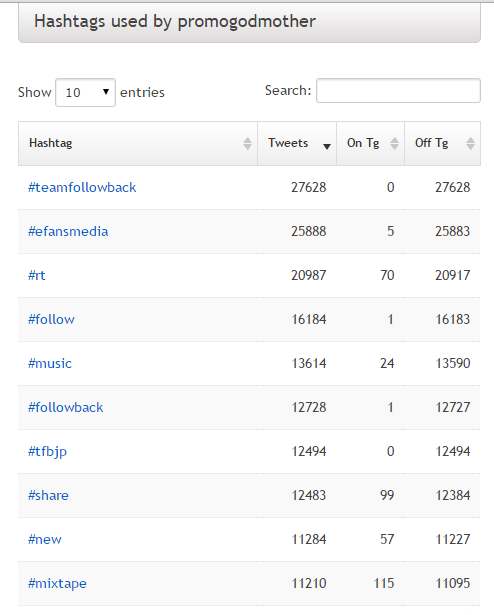 Promogodmother is easily the most ridiculous name I have come across whilst reviewing this data. 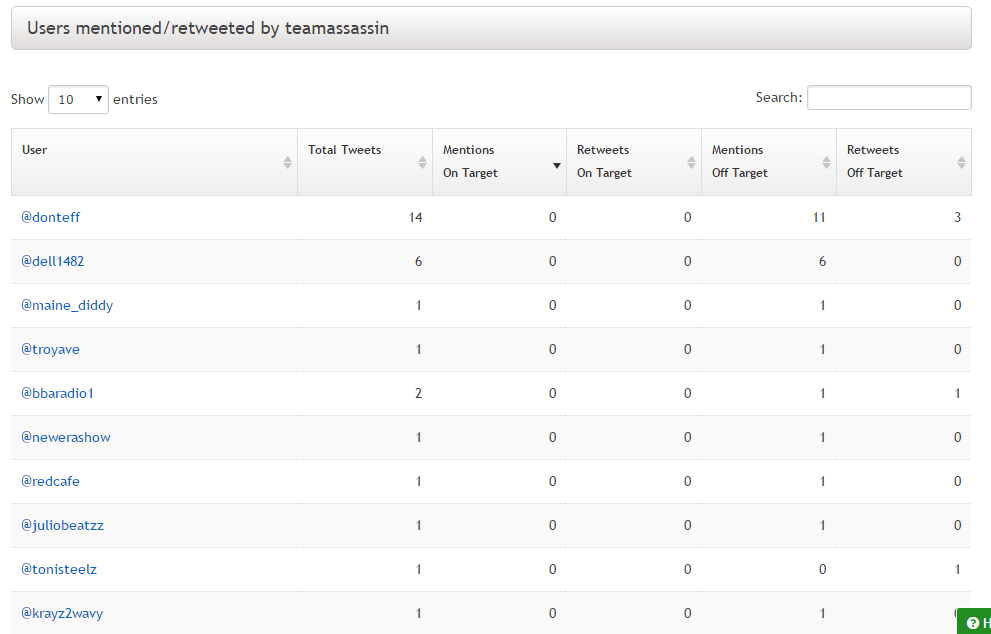 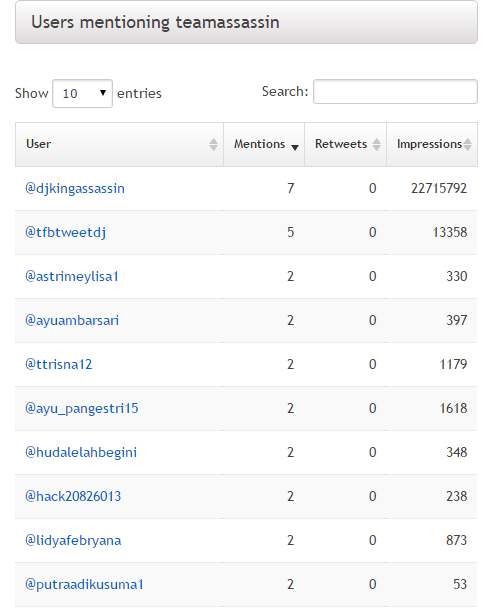 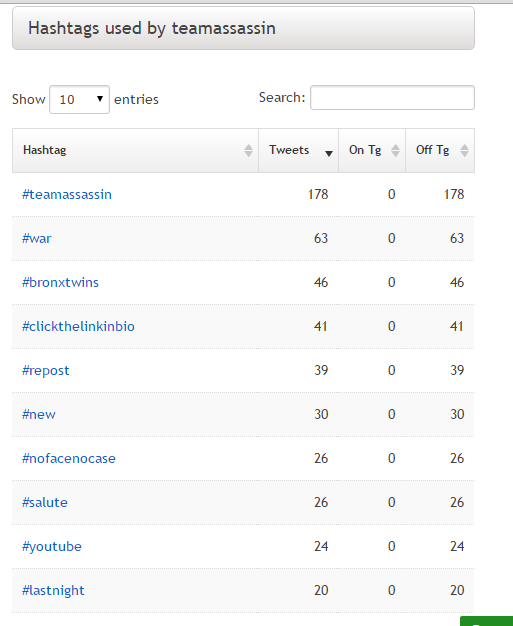 I’m not sure why there’s so little data for this particular user. I think it might have something to do with my theory that, at some point in time, this used to be a different account and so there has been some issue with collecting the data.

So, what can we take from all this?

The #hiphop hashtag is fucked.

Hip-hop artists are pretty shrewd when it comes to adopting new technology and finding ways to use it to promote their own work. In fact, I think that hip-hop culture leads the way when it comes to experimenting with new platforms and medium.

But, I often come across people who heavily misuse the tools and platforms available. They make the mistake of associating hustle with quantity. That’s exactly what we’re seeing when it comes to the data featured in this article. Huge numbers of Tweets from users who receive very little engagement in return.

I’ve experimented, albeit on a much lesser scale, with Twitter automation in the past. However, it has always been the genuine, personal exchanges that bring me the most long term value.

Focus on building those genuine relationships. Your own community, Your own ecosystem.

It’s much better to have 1000 genuine fans than to dominate a hashtag that nobody cares about.

I don’t know if it was worth it.

I can only tell you that #hiphop is dead.