Why Do Hip-Hop Artists Love Scarface?

Home / The Breaks / Why Do Hip-Hop Artists Love Scarface? 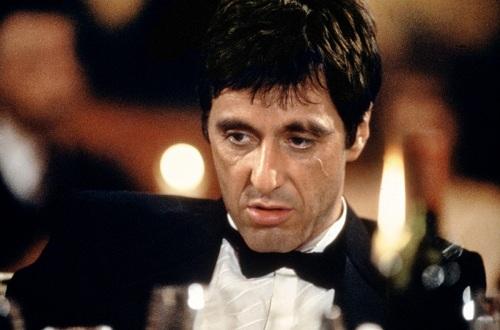 Why Do Hip-Hop Artists Love Scarface?

Last week, 28 years after its original release, Scarface hit a new high by announcing itself in Blu Ray format. Hip-Hop artists and fans rejoiced as Brian De Palma’s spectacular personification of one man’s rise and fall was given a new platform from which it could once again take on the world. So why has a film that was initially shot down upon its release, risen to become one of the most acclaimed movies of all time? More to the point, why is it that Scarface has unintentionally been taken under the wing of Hip-Hop and championed specifically, almost defensively, within Hip Hop culture? The association and bond between the movie and culture is so knowing, that it even defers the interest of curious film lovers who don’t like Hip Hop. Now that’s a crime.

For the information of those non Hip-Hop fans I just referred to, Tony Montana 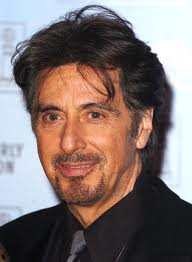 is the soul bought to you by Al Pacino. It’s both the character’s background and Pacino’s ability to bring life through his own vision and experience which make Montana such a relatable character. I’m of the opinion that a lot is owed to Pacino, for there is a little of Tony Montana in him, meaning that only he could deliver this performance. Only Pacino could speak those lines with conviction, he didn’t need a script, the words were already feelings he had been through and this was his outlet. See by 1983, Pacino had been through that rags to riches journey himself. He grew up in the South Bronx and experienced a difficult early life, with his Father leaving home and Mother dying at a young age. Pacino also left school at 17 and worked a number of low paid jobs in order to fund his time as an aspiring and ever learning stage actor. He experienced rejection, after not being accepted into the Actors Studio and often found himself in the position of not knowing where his next meal or shelter would come from. Yet, he continued to strive and his hunger for acting combined withPacino meeting teacher Charlie Houghton through the Herbert Berghof Studio gave him all the fuel he needed. Over the next 15 years, Pacino’s performances in films such as The Godfather 1 & 2, Dog Day Afternoon and Serpico would propel him onto a level incomprehendable to him. From the streets, to stardom. The world was his. Sound familiar? 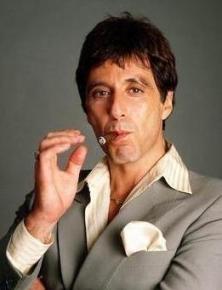 Now for those that don’t know the story of Tony Montana, he was a Cuban refugee who arrived in Miami as part of the Mariel Boatlift movement. He wanted to make money and with his street sense he quickly associated himself with one of the most profitable industries during the 1980’s – cocaine shifting. He ruthlessly hustles his way to the top in search of “…the world, and everything in it”. His rapid rise to the top overshadowed only by his gloriously dramatic demise. I won’t talk too much further about the actual movie here because, the movie says it better than I can, so go watch it!

“All I have in this world is my balls and my word and I don’t break ’em for no one”.

Now Hip-Hop started out as the movement of the underdog. The media, journaists and music snobs,  said it wouldn’t last, that it was just a passing phase that it had no substance. Not the right look or sound to to maintain any longevity. Hip-Hop laughed. The synchronised 5 elements intertwined creating a whirlwind of music that smashed through social, political, racial and human barriers from the late 80’s through the present day. It became a multi billion dollar industry. Though it too has become a victim of its own success, with all of its ambition giving birth to controversy. Some argue that it became too commercial, that it sold itself out, that quite simply, it got high on its own supply. It lost its focus and the very drive behind the movment could have been used to better effect. The beauty of that is, it’s up for debate. However what is clear is that there is a direct, transparent reflection between the real life of Al Pacino, the climatic accession of Montana and the life to date of the Hip Hop community.

Any Hip Hop fan reading this, will at this point be able to reference at least a handful of artists whose very lives have reflected this cinematic structure. Jay-Z, Biggie, Tupac, Eminem and Russell Simmons are just a few examples of those whose lives within Hip-Hop have too taken them from street corners and trailor parks to becoming icons, moguls and all out superstars. Not without controvery, of course.

There’s a common misconception that one of the main reasons the Hip-Hop community loves Scarface is because of the parallels in violence and drugs. Sure, to some there is that association and for good reason. However, hopefully this piece goes some way to identifying and highlighting the deeper intricacies. This film does not glorify drug use. Anyone with an ounce of sense will understand that. Pun intended. In fact, as time goes on it could be argued that Hip-Hop is starting to become less drug orientated, taking lesson from the fact that certain heights can’t be reached when high.

The Hip-Hop mentality of being able to produce something from nothing, about writing rhymes to kill time and surviving on nothing but your word and drive echoes that of Scarface. But there are also similarities in the obstacles that Hip Hop artists and professionals face when trying to reach their goals. Montana viciously killed off his competition. He made his way through a world of corruption based solely on his own instinct. Though ultimately his self involvement and egocentricity, combined with his ongoing reliance upon cocaine for escapsim affected his closest relationships with best friend Manny and wife Elvira. The same happens when an artist starts to receive exposure and recognition. Their relationships with mentors and friends change or they themselves struggle in adapting with the acceleration of their lifestyle. Paranoia sets in and something has to give.

Then there’s the dramatic ending. Going out with a bang. For those reading this 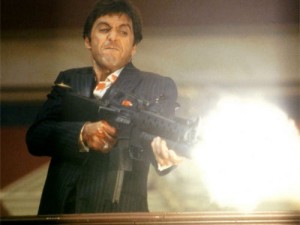 who haven’t seen the movie, I won’t give anything away, but Hip-Hop too is all too familiar with ugly finales. A Hip-Hop fan will follow an artist almost religiously until their untimely demise, incarceration or unrivalled success. They watch Tony Montana in the same way, inspired by his determination and journey and then intrigued and mystified by his downfall.

So there we have it, hopefully this has gone some way to explaining that there is more to Hip-Hop’s love affair with Scarface than purely coke and guns.

The way I see it, Scarface is a theatrical example which unintentionally yet prophetically echoed aspects of the Hip Hop culture which emphatically followed. That’s my word.