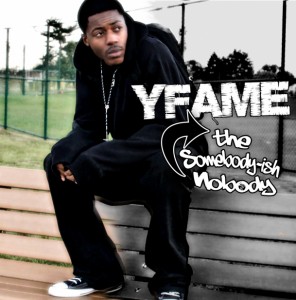 Hoodlouse is the section of our blog whereby we support artists who we feel truly represent the values and ethics of Hip-Hop. This could come through incomparable vocals, ingenious production, creative  lyrics, outrageous content or more importantly, gut instinct. Through whatever avenue we find your music and whichever state, suburb, county, creek, gutter or lab you’re making music from, if we like it then we’ll share it.

If you’re a fan of the music we publish then comment on it, RT it, like it, StumbleUpon it, open that mouth you’ve been blessed with and TALK about it! It’s as important as ever to spread the word about the Hip-Hop music you love.

Intro OVER. Now we can tell you all about our first featured artist YFAME.

We joined Twitter a couple of months ago now and within the first few weeks we got Tweets from rappers, beatmakers and singers asking us to check out their work. 95% were pretty lame, dated or lacked any originality. However, one track that caught our attention was New Jersey based producer and rapper YFame’s – ‘In The Air’. It’s tough not to sing along to the hook in this track, put your masculinity aside for a second and enjoy it.

Not only did this track shout out to us that we needed to find out more, but YFame’s self made blog/artwork had that mark of a hustler. We test you to find anyone who can hold down a 9-5 and still produce music on this level. Any doubts will be squashed once you’ve checked ‘Honest’. The production and lyrics in this track define that very word.

To find out more from the man himself check what Famey Baby had to say when we caught up with him for an interview (below) and visit www.iamyfame.com !

WTBD: Seeing as we found you on Twitter, can you describe yourself in 140 characters?

YF: 20 Y/O. Artist, Music Producer. Determined, Universal. I have music for everybody. musically active for 10 years and i refuse quit. YFame !!

WTBD: We’ve found you upon the launch of your newest Mixtape ‘The Somebody-ish Nobody’. Describe to our readers what they’ve missed so far?

YF: They’ve missed 3 extraordinary mixtapes. My first was entitled “Bookbagz & Chuck Taylors” which i released June 2nd, 2009. This mixtape was sort of gritty, it was all about lyrics and Hip Hop. It shows how i separate myself from everyone else lyrically. Next i did a project called “YFame presents : Da Thriller”. That was released October 28th, 2009. It was a Halloween mixtape which included my favorite Horror movie & Horror TV show themes, with a twist of MJ’s “Thriller” of course. Personally some of my best work. The third project i did is called “Kid On The Bus”. VERY personal, VERY straight forward. Its basically my life in 14 tracks. The mixtape package included a short narrative video which is now on YouTube.. Search: “Kid On The Bus”. As far as putting projects together, i think i’ve done a great job so far. All of these mixtapes can be found on my website www.iamYFame.com

WTBD: Now you rap, produce and do your own artwork. Which came first and which is most important to you?

YF: Music Production came first. 2001 i made my first beat and was was doing that for quite some time until i picked up a pen and pad and started writing rhymes. Those rhymes turned in verses and those verses turned into songs. Importance? I would have to say that Music Production is MOST important to me. It’s my passion. Making music gives me a feeling that nothing else can give me, and that feeling is indescribable. My fellow Music Producers will agree.

WTBD: Producers are now getting as much recognition as rappers and singers, but on the flipside a lot more people are now claiming to be producers with production software more easily available. How do you think this might affect Hip-Hop?

YF: It already has affected Hip Hop. In my opinion. Tons of young “Beat Makers” are going out and buying and / or downloading these programs and abusing them. One thing that affected Hip Hop WERE those “Beat Makers” getting the recognition that they got. Then before you know, everybody all of a sudden wants a beat decorated with piercing synths and booming 808s. Now don’t get me wrong i use FL Studio XXL, which IS a software. The difference between the “Producers” and the “Beat Makers” in my opinion is the knowledge or actual understanding of music. “Beat Makers” lack both.

WTBD: Your bio states that, ‘You will NEVER hear “gangster” music come from YFame’. What do you consider gangster?

YF: Gangster music, or Gangster rap as in Guns, Drugs & Abrasive lyrics. I’m not a Gangster and i’m far from one. I don’t know about that lifestyle and i don’t care to know. Nor do i care for the rappers who make that type of music. I frown upon it. Notice i said “Rappers”. To me, there’s no such thing as a “Gangster Artist”. I salute N.W.A. & 50 Cent for making a killing off of their music, But i honestly think it’s getting old. To all of the Gangster rappers, find something new to talk about, it’s about to be 2011. Get creative, you’re welcome.

WTBD: Do you think rappers now need to consider their live performances more, as that seems to be where the money currently lies?

YF: Yes. Shows / Live Performances are extremely important to me, and should be important to other artists as well. Your stage presence plays a major part in who you are as an artist. Interacting with the crowd, crowd participation, the way you hold the mic, projecting your voice all plays a part. One of the main things to perfect and constantly work on is your live performance. I encourage artists to do more shows / Open Mics / showcases. Also, it wouldn’t hurt to practice in a mirror , i do it all the time ( Haha )

WTBD: Tell us the bar you’re most proud that you’ve written…

YF: WOW.. That’s hard. I don’t think it’s a bar that i’m MOST proud of but it’s the one that came to mind and i’m pretty proud about it. It’s “Niggas actin’ like they made YFame, but YFame is SELF made / If i’ma be SHADOWED by ANYBODY it’s gonna be SELF – SHADE”. .Basically saying that i made myself, i made my own image, my own brand, and my own sound. Also saying that i won’t let ANYBODY think that they made me. Since 10 years old i’ve basically been on my own with this music and i refuse to be shadowed by anybody. Point blank. That song is on my new mixtape “The Somebody-ish Nobody” ..It’s entitled “Self Made”.

WTBD: So what can we expect to hear from ‘The Somebody-ish Nobody’ mixtape?

YF: For the current supporters of me, Growth. To NEW supporters, Something NEW. If you’re an aspiring artist, get ready for a reality check. If you’re one of those artists who think that you’re bigger than what you are, THIS mixtape will bring you back down to earth. This mixtape is very musical, and i say ALOT of stuff in this project. Every song says something. It just might be my best so far.

WTBD: It’s clear for people to see that ‘Hip-Hop’, at least commercially, has travelled in an unfamiliar direction recently. Who or what do you think will be key to its development over the next year?

YF: Now i could say “Me!” ..But i think the real key is UNITY. These artists who make “Real Hip Hop” never want to support other artists who also make “Real Hip Hop”. It’s gonna take a movement to bring Hip Hop back to the way it was, and i don’t see that happening without unity. Example: The South. The south took over because they have unity. They all stuck together and supported eachother. Currently i’m not seeing that anywhere else. As far as artists who could develop Hip Hop, i would have to say Apollo The Great ( www.ApolloisHIM.com ) , O-Skeez ( www.OSkeezOnline.com ), KanYe West, B.O.B., J Cole, Wale, a few others and not to mention, me, YFame.

WTBD: Tell us a little about Wondamuzik?

YF: Wondamuzik is an indie label / production company founded by me in 2005 at the age of 15. It consists of Apollo The Great, O-Skeez & Dj Deuce. There were other artists but you know, some people just aren’t passionate about music like the rest of us are. “WondaMuzik” is what you would hear in the beginning of most of my beats / songs. We make music for everybody. Personal music, Dance music, Soulful music, Reggae music, Raw Hip Hop, Current Hip Hop, Pop, We also experiment from time to time. It’s a “Wonder” how we make such good music so consistently. Subtract the “er” from wonder and you got “Wonda”.

WTBD: Name one person we should be following on Twitter and why?

YF: Me, @YFame ..I’m really trying to get the #SupportYFame & #TeamYFame campaigns rolling, so when people find me on Twitter they should hit me with a #SupportYFame or #TeamYFame. Which ever one they prefer. Besides me, everybody should be following @KanYeWest, simply because he’s putting out the best music right now. Those “Good Friday” tracks are all GOOD music (No pun intended).