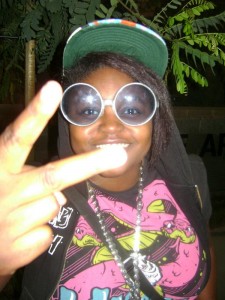 Like your hip-hop left of centre? Swag a little strange? Then keep reading you off beat freaks.

To our Hoodlouse feature we introduce you to L.A born, raised and based emcee Weirdo T.C, A.K.A Weirdo Wit Da Glassez.

She caught our attention through Twitter a couple of months ago, firstly through her animated style (digitally and physically) and then through her mixtape, ‘Made From Scratch Volume 1‘.

The mixtape serves as a natural extension to T.C’s colourful personality. Bumping this is like being stuck inside a Hip-Hop kaleidoscope.

So many Hip-Hop artists choose to be ‘controversial’ in attempt to be bold. What refreshes us about Weirdo T.C is that she shows her personality through the way she flows and the diversity of subjects she’s willing to rap about. Taking risks and experimenting with the music is what Hip-Hop is all about, so for that Weirdo, we salute you!

Check her sugar coated swag music below and see what she had to say when we caught up with her for an interview.

WTBD: Seeing as we found you on Twitter, can you describe yourself to our readers in 140 characters?

WTC: I’m a young female rap artist from Los Angeles CA. My style represents the less serious side of life. The fun, careless, free spirited side of living.

WTBD: So, having had a few months to reflect on your first Mixtape ‘Made From Scratch Vol 1’, how you feeling?

WTC: The majority of my feeling is motivation. I’m so motivated to out do my last tape, it’s not even funny! I can’t wait for Vol. 2. I’m certain everyone
will be pleased.

WTBD: Have you got any one particular track that you’re most proud of?

WTC: Yep! My “Weirdo Swag Money” song! I’m so proud of that song because it was actually my first time ever producing a beat. And it turned out to be the song that is getting the most positive feedback from the LA hip hop
community.

WTBD: One of our favourite tracks from the Mixtape is ‘Unthinkable’ featuring Nella, Chuck D and Kwalified. Can you tell me bit about these guys?

WTC: Umm yeaah, Chuck D is actually the CEO of a up & coming record label
based in Los Angeles, he is also the producer behind a large selection of my music. Nella is a rnb/soul singer. I have so much faith in her. With a bit more training I could see her being the new aged Aaliyah. Last but not least is Kwalified! Kwalified is actually my older cousin. He lives in Hawaii and is very notable amongst the Hawaiian natives. He never fails me when I need features for music!

WTBD: Can you tell us a bit about where you’re from? Name three things you love and hate about living in L.A.

WTC: Three things i love about LA are the beaches, Hollywood, and the fact that most people in the music biz are local to the Los Angeles California basin.

WTBD: Tell us what we’d be likely to witness if we spent a day with you?

WTBD: Now you talk a little about your image / glasses in the intro of the Mixtape. Do you worry people might think it’s a gimmick?

WTC: Nope, I’m a weirdo. I hardly ever care what people say about me. Glasses are my thing. WITHOUT THEM I FEEL NAKED. Its not an attention thing for me. I’ve been rocking glasses ever since I was a toddler. Glasses are 1 of my many loves.

WTBD: Nicki Minaj seems to be taking the limelight from all other female rappers right now, what do you think of her?

WTC: I like Nicki Minaj. She has a lot of haters doing there job right now. Its
enough light to share, There just aren’t any females trying hard enough to get some. Nicki isn’t hogging any light she’s just doing what she does really well. Cant hate on somebody succeeding at what they are doing if they’re doing it well.

WTBD: What do you make of the term ‘femcee’?

WTC: I don’t really agree with this term. yet i still use it. lol. I don’t see why females cant be referred to as emcees also..

WTBD: The phase ‘Hip-Hop is dead’ seems to be rearing it’s ugly head again recently, what do you make of Hip-Hop’s current state?

WTC: Its not dead its just evolving.

WTBD: What’s next from you? You did say the next Mixtape will be x10 ‘Made from Scratch’, that’s a tall order.

WTC: I’m currently working on Vol 2. the title is weird alotta people are gonna question me but idc. lol. i won’t disclose what it is yet but just keep
updated with me!

WTBD: Finally, recommend one person we should be following on Twitter and why?