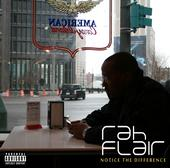 What is it about Detroit?

Some of our own inspiration, direction and opportunities have all been assisted in some way or another by the overall contribution that Detroit has made to Hip-Hop.

Consequently, we’re fascinated, intrigued, inquizitive and ultimately supportive of any artists we love from the city that’s given us so much, yet we still only know a fraction about.

So naturally, when we heard the equisit work of Detroit rapper and producer, Rah Flair, we had to ask a few questions. After the first few bars of ‘Move‘ (below) we’d been hit by an injection of nostalgia. Rah’s mix of of soulful production alongside a laid back and honest delivery had shades of influence from Slum Village.

Check out what he had to say when we caught up with him for an interview. Sadly, we didn’t get to travel to the D for this one! One day…

WTBD: Describe yourself to our readers in 140 characters or less…

Rah: I’m a creative introvert that enjoys being a dad, making music and fashion.

WTBD: You started making music at 11 years old. Which artists did you want to grow up to be like, who were you inspired by?

Rah: During those years I grasped on to anything that was good, I listened to a lot of R&B and cleaner rap acts like MC Hammer because my mom use to really monitor my music. At first it was acts like Guy, Jodeci and Heavy D. that inspired me, I really became a fan of hip hop when Nas came out. Illmatic was the first tape that I owned, I used to idolize Nas man. I tried to dress and rap like him from Illmatic up until Nastradamus. Ghostface and AZ were probably my second and third biggest inspirations, those were the cats who I really studied besides Nas.  Tribe Called Quest, De La Soul, Outkast, UGK, Jay-Z, Biggie and Pac got heavy rotation too. Being from the Midwest  I was exposed to a whole lot of different styles of hip hop because radio here in Detroit played everything from E-40 to Biggie so I was able to take a little bit from E-40 and his crew, a little Bone Thugs N Harmony and mix it all up with what I learned from studying  Nas, AZ and Ghostface and come up with my own style.

WTBD: What is it about Detroit? The rest of the world gets to hear of so many great musicians from your hometown. Do artists support each other on the come up or is it fiercely competitive?

Rah: The battle rap side of Detroit artistry is probably the most competitive because of the nature of it, I’ve seen a few battles almost get physical in my time. Other than that it’s support, Detroit’s music scene is so deep we got anything for anybody’s music tastes. We got superstars like Eminem and Kid Rock to hardcore rappers like Insane Clown Posse all from the 313. The next step would be for someone who has attained success in the industry to come back and create and outlet for our city similar to what Miami, Atlanta and Houston have done in the past.

WTBD: So, you graduated from Tennessee State University, Nashville, before going on to study for 9 months at the School of Audio Engineering. Some argue that the academic route can stifle your own creativity. What have you gained most from this period of your life?

Rah: I really paid my dues all through school, I was going to open mics and doing shows so that period did nothing but good for me. I had the chance to network and build relationships with talented people from all over the world who I still talk to today. It’s pretty much not a city that I visit where I can’t do a show or record and that’s all because of me going away. I really got a chance to experience down south rap before it really took off worldwide and was able to record with a lot of great underground artists and producers. I was able to record a lot of music for myself as well during that period of time which really helped developed my style into the music I have presently created. On top of the music I was still going to school and working so I experienced the real world and came out with a Bachelor’s degree, Pro Tools certification and a vast amount of life lessons. I wouldn’t trade that period of time in my life for the world.

WTBD: Since February 2009 you’ve been solely dedicating your time to work on your debut album, ‘Notice The Difference’. What struggles and sacrifices have you had to overcome in this period of your life without a stable pay packet?

Rah: Being laid off from General Motors was a great blessing in disguise because it allowed me to prioritize my life and get everything back in order. I wasn’t recording any music when I was working there and I had thousands of dollars worth of studio equipment just sitting in my basement collecting dust.  Financially my basic needs were still being met, I couldn’t afford to shop or go to the bar like I used to but it really wasn’t a stressful time for me because music was my therapy. I dusted off my equipment, remixed a few older songs and and started creating new ones and that’s how “Notice The Difference” came to pass. During that time I kinda realized the joys of just being at home and learning how to benefit from somewhat bad situations. My son was 18 months at the time and I’ve really been able to enjoy seeing him grow, if I’m not out of town or in the studio I’m doing my daddy day care thing and it’s something that I enjoy.

Rah: Definitely, I’m in a good space now right now. I’m a much better person, father and musician than I was in 2009 so I feel complete. My music is reaching people and it’s being embraced not just in the states but across continents so it’s a good feeling with only better things in my future.

WTBD: One of the instruments you use is the MPC2000. For you, what is it about the 2000 series that makes it more attractive to use than some of the more recent models?

Rah: The quantization and the analog feel that it gives the drum sounds is the best to me, and besides that so many classic records were made with it makes me a believer in it. I recently sold everything except my ASR-X so I’m looking to purchase either a MPC 3000 or 4000 and see what kind of magic I can make with the ASR.

WTBD: Do you think the sound quality and depth in music will be lost as digital software develops or would you say that to perfect using certain software is as much of a skill as learning a physical instrument?

Rah: I don’t think the sound quality will be lost because most of the vintage companies like Neve, and SSL have created plug-ins to incorporate the vintage sound into the digital formats. Nowadays you have to be able to use software and hardware to keep your sound current and fresh. A lot  of my beats are a mixture of drum machines, keyboards, live instruments and production software.  That’s what the greats do, if you don’t learn how to utilize everything and build up an arsenal you might get left behind. Nowadays you got 18 year old kids getting rich off of producing by clicking a mouse, music and technology go hand and hand now. You have to incorporate the two.

WTBD: What’s next for you? Are you doing a lot of live shows to promote the album?

Rah: Right now I’m doing a lot of PR, reaching out to all the blog sites, internet radio and commercial radio to make people more aware of me as an artist. My music is being received well, I’ve been on tons of blogs, radio stations and mixtapes, I’m working on a mixtape called “The Chronicles” now that will be done within the next month. That joint is going to be crazy, got a lot of dope material on it. I’m actually stepping away from the production on this project and will be strictly in the artist role to get back to the essence of when I first started.  After that is complete I’ll be in the streets promoting and performing.

WTBD: Can you pin down a show that you would say is your best so far?

Rah: My best so far would be Tennessee State’s homecoming concert in November of 2010, I had the chance to open up for Roscoe Dash and Tierra Marie. It was the first time performing one of my new songs that will be on the mixtape and it really made me feel confident about the music I’m  working on to be on this next project.

WTBD: What’s the best advice you’ve ever been given when it comes to making music?

Rah: When I was younger I went through the phase of rapping about stuff I wasn’t doing like smoking weed and killing people, mind you was only 12! My mom found my rap book and read all my raps but she wasn’t really angry as I thought she would be, she told me to keep it real and that’s what I been doing every since and it’s paid off well. It’s only one me and that’s what I want my music to reflect.

WTBD: What album are you most looking forward to in 2011? Do you still find current music inspiring or do you find yourself listening to the same music you were 10 years ago?

Rah: I’m checking for BIG Krit’s next project, other than that nobody. Right now I’m feeling a lot of independent cats like Stalley, Curren$y and Donnis. I have a lot of respect for  Dame Dash and that whole BluRoc movement he got going on in NY right now, it’s good for hip hop since everything is so controlled and forced by the suits. It’s good to see and hear music where the artist is the creative force behind it, that’s the way hip hop should be. It’s like sports, the NBA, NFL , etc. use retired players as coaches and front office staff to help the younger players and develop them into the players they need to be to improve the game. Hip hop needs cats like Busta Rhymes and KRS One in those executive positions to improve the music industry, at the rate music is going now it won’t be any major record labels left anymore.

Connect with Rah Flair at twitter.com/rah_flair