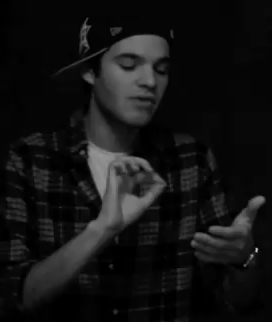 How many Hip-Hop artists do you know from Austria? If you know more than 5 then please get in contact with us, because we need educating!

Thankfully, when we found out that Kareem Kateb is from Vienna, we were gently reminded and suitably refreshed, acknowledging that Hip-Hop isn’t exclusive to the U.S and U.K, as some Hip-Hop blogs and informants may have you believe!

It’s no secret that we’re huge D’Angelo fans here. So when we opened the first of Kareem’s YouTube videos and the unmistakable bass line from “Devils Pie” hit, we were ready to be disappointed. However, we’re pleased to report that Kareem Kateb (aka Mirakle), got one stage further than Canibus and delivered a respectable, enjoyable few verses over this beat.

The rest of his “The First Wonder” mixtape and “Weekly Wonder” videos have followed a similar format. Popular beats from producers such as Exile, Bangladesh and Alchemist have all been explored and experimented on by Kateb, leaving the youthful sound of someone casually sharpening his style without inhibitions.

We’re always pleased to support any developing artist who puts in that extra effort to make engaging YouTube/online content, and more importantly, who approaches us with a down to earth attitude. Kareem did just that, so check the interview below to see what your new Central European friend has to say about life, times and Hip-Hop via Austria.

Interview with Kareem Kateb / A.K.A Mirakle

WTBD: Can you tell us about how you got into Hip-Hop as a listener and then as an artist?

KK: I think the first Hip-Hop song I heard which got me interested in the genre was “I Cant Deny It”, and that was like my favorite song back in the days, even though I heard stuff like Halftime afterwards which didn’t affect me in the same way because it was a little too complex for me back then. I only started writing rhymes seriously around 2007 because I was just interested to see how many words in one line I could get to rhyme haha… so I was trying hard to get like four or five syllables to rhyme and by time you got to the 3rd line it wasn’t even making any sense.

WTBD: Are there many Hip-Hop artists out in Austria? What’s the attitude towards Hip-Hop out there? Excuse our ignorance but tell us a little about what we’re missing!

KK: It’s not a big scene at all in my opinion. The last Austrian rapper that I heard of who got signed was “Money Boy” (Sony) so… there’s not much I have to add to that really. It’s a little out-dated, but there are artists I know of who are working hard to make original sounding music which is actually dope, one example is Left Boy.

WTBD: You were in the U.K for 3 years right? Where did you live and what do you remember/miss most (if anything!)?

KK: That’s right, I lived in Portsmouth and went to University there. What I miss most… apart from living independently, i’d have to say Greggs and this Chinese restaurant called Golden Bowl haha. The UK is a great place for music though.

WTBD: Your voice is a little unusual, in a positive way; you can hear the mix of European and American Hip-Hop influence. Do you find that the music you’ve listened to has shaped your vocal style consciously or just naturally?

KK: That’s a funny question, it’s actually something i’ve wondered myself. It could be that I attended an international school and grew up surrounded by all kinds of accents, but it’s just as likely that the amount of Hip-Hop and Rap I listen to has shaped my accent.

WTBD: You released your first mixtape “The First Wonder” back in February. How long was that project in the making? What did you learn from the experience?

KK: The First Wonder was super rushed to be honest, but I think for the amount of time and work I put into it, it’s a great mixtape. It’s hard to say how long it took because there’s tracks that I made long ago that I put on it, and tracks that I did the night before I released it and put on it, haha. So i’d have to say overall it can’t have taken more than three weeks to complete.

WTBD: You’re currently working on the follow up, which I believe is titled “The Second Wonder”, what will you do differently when putting together this project?

KK: Yep, it’s going to be called The Second Wonder, and the difference is that I’m not going to rush it, and i’m going to try and put more tracks on there than were on The First Wonder. I’m not really one for choruses, but i’m not foolish enough to think that I can make a whole mixtape with none of them, so I need to try and get better at writing them and putting them in songs.

WTBD: Do you find your location makes it harder to collaborate and generally gain exposure? Are you finding you’re using social media heavily as a networking tool?

KK: I feel like there’s a lot more rappers per capita in the U.S or the U.K compared to Austria, so that makes it harder to find people to actually record with and just chill and discuss music with. In the grand scheme though its not a barrier at all, i’ve done tracks with people in LA, Virginia, New Jersey, Seattle, so it’s not as if i’m struggling to get collabs done. I’ll admit that I wouldn’t mind having more ‘rapper-friends’ in Vienna though, just to exchange ideas with and work on stuff with.

WTBD: Tell us about an average day in your life, when do you find the time to work on your music? What kind of equipment are you using?

KK: I think my life on a day-to-day basis is pretty similar to any other 22 year old – I go out a lot, I work part-time, I play football every now and then, and I make music. To record I use an Audio Technica microphone and some kind of standard audio interface haha, and yeah, I record into Ableton Live.

WTBD: Your “Weekly Wonder” episodes on YouTube have gained a lot of positive responses. Is this something you’ll be continuing? Do you enjoy making the videos and putting the visual content out there?

KK: For sure. I feel like putting out a video with a track is the most logical thing to do with tracks that you really want people to hear, plus I enjoy making them and being involved in the whole process. I actually wanted to make a whole edited video for my track 24 Hours, just because of the issues I discuss and points I make, so that people pay more attention. At the end of the day, with a video you’re addressing two senses instead of just one, so yeah, it makes sense!

WTBD: What albums and artists have you been listening to lately? Do you find you listen to more or less music from other artists when you’re in the process of making your own?

KK: I’ve been listening to a lot of wild stuff. I like to pick random artists that I hear a lot about and watch a few of their videos and try to pick apart the reasons for why people like certain rappers, because unfortunately there’s a lot more to it than just the music. I’ve been listening to a lot of J. Cole. Wax is a great rapper and overall musician, i’d recommend anyone to watch all of his videos on YouTube and get all of that man’s music. I’d say those two are probably the best out right now. I listened to Tyga’s version of B.M.F a few weeks ago and that shit is still stuck in my head which is crazy. Big Sean just dropped his single “I Do It” which is also stuck in my head. Earl Sweatshirt’s album also gets a lot of play and Brandun DeShay’s second mixtape Volume Two! For The Show is dope too. I really vary a lot between styles, as far as Hip-Hop goes.

WTBD: Finally, what’s your ultimate aim with your music? Are you setting yourself targets or goals you want to reach or just putting the music out there and seeing what happens?

KK: My aim is to be able to make a living out of the music I make, Regardless whether that’s $2,000 a month or 1 Million. The main thing for me is that I won’t have to change the music I make or anything. I don’t think its wrong to try and make money out of the art, its just that I think its a viable career choice!

To connect with Kareem Kateb, hit: