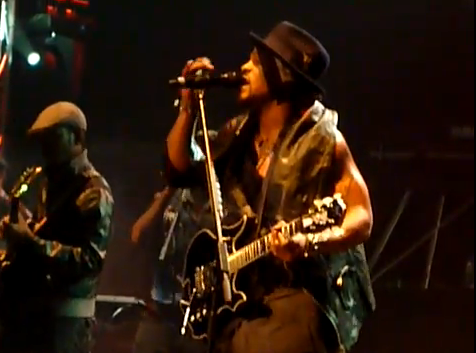 [dropcaps style=”circle”]D[/dropcaps] is more than back. His whirlwind tour around Europe these last couple of weeks has created something of a musical black hole, swallowing up the last 11 years of soul and R&B music and making it all seem insignificant. Everything about his performance in Brixton, from the crowds expectations and reactions to D’Angelo’s voice and spirit, created an assured atmosphere, this is the second coming.

Anybody reading this article will know and have felt the hype surrounding D’Angelo’s return. The last decade has seen fans hooked on the slightest news story or rumour regarding his music and personal life. It’s been unfortunate for himself and his fans that most of the column inches associated with his name have been a little controversial. Check our D’Angelo European tour blog post for an overview of just what he’s been doing over the past 10 years.

Those arriving at Brixton Academy might have seen the YouTube videos surfacing this past week of D’Angelo’s concerts around Europe, but a few shaky fan videos gave little insight as to what to really expect. There were two standout questions running through the minds of those waiting eagerly to get into the venue;

What the hell is D’Angelo going to look like?
Is his voice gonna be the same?

At just past 9.20pm, those questions were answered. Though, the latter before the former as D’Angelo opened in darkness. A move that propelled excitement and suspense to pulse shattering levels. The first note answered the first question, YES he sounds as good, if not better than ever before. As the lights rose, a smiling D’Angelo commanded centre stage, relaxed and ready to get into it, strapped with a black guitar and rockin’ a slightly new image. His natural hair and rather unusual combination of loose vests gave him more of a rock look than his 90’s R&B  days, as girls lost their minds and guys dropped an internal sigh. The crucial thing is that he was back and that’s all anybody REALLY cared about.

It became quickly apparent that this was going to be more than just your standard vocal led soul or R&B concert. This was D’Angelo the artist and multi instrumentalist, backed by a four backing singers (incredible by the way) for those classic D four part harmonies, Chris Daddy Dave who delivered a mouth watering drum solo lasting near eight minutes halfway through the gig, heavily featured lead guitarist Jesse Johnson and fellow Soulquarian, long time collaborator and bassist Pino Palladino. For anyone who is heavily interested in the music industry in general, this was a dream line up of musicians and their individual contributions were worth the ticket price alone.

D’Angelo played a LOT of guitar throughout, to the delight of some fans and to the despair of others who were seemingly expecting a more smooth and polished R&B performance. It was clear that D’Angelo was making no compromises and in fact he looked happy being able to showcase a dimension that may have been suppressed 10 or 15 years ago. This was Voodoo D’Angelo.

In fact the first two thirds of the gig were an explicit, live interpretation of the Voodoo album. As one track blended into another, D’Angelos affection for the album and commitment to perfecting the way in which it was presented as a journey and experience were clear. So much so that fans had to wait nearly an hour before hearing the first track from Brown Sugar, a  near twelve minute variation of Shit, Damn Motherfucker. Though this left some Brown Sugar fans frustrated, it did showcase D’Angelo’s unhuman vocal range and he was beautifully in control of every single level, frequently unleashing that traditional rasping D’Angelo scream and in the next breathe melting the hearts of every woman with delicate high pitched intricicies. D’Angelo did eventually lend a little time to the Brown Sugar album, taking solely to the Rhodes for a medley of tracks which included Crusin’, Jonz In My Bonz, Me And Those Dreamin’ Eyes, before eventually reverting back to Voodoo for the anticipated Untitled (How Does It Feel). It was here that D’Angelo showed just how aware and conscious he is of what his fans want as he played the first note, before letting it simmer a little, standing back from the Rhodes and taking it all in. A moment that highlighted just how well he knows music and just how pleased he was to be on stage. Now, to anyone who thought that these gigs might have just been a way of getting a quick pay cheque, you only had to hear the new tracks that D’Angelo dropped to understand that, he really is back and back breaking boundaries. ‘Sugar Daddy‘ was a mellow, stripped back soulful number again delivered on the Rhodes but ‘Charade‘ (someone correct me if i’m wrong on that title) was almost the complete opposite. A full throttle, spell binding, exhilarating 8 minutes of soul, funk and R&B with a distinct dose of Prince about it. I cannot wait to hear this track again.

Well there’s no doubt that he’s back and there’s no doubt that he’s been working hard on getting this return right. At times, it was like watching Prince on stage, giving a glimpse into the direction of D’Angelo’s new album and highlighting the level of influence Prince has had on the new material. Charade is a future classic if it ever sees light.

Those who were expecting to hear more from Brown Sugar would have been left slightly bewildered, but Voodoo fans would have understood, appreciated and possibly even expected that this would be the next stage in D’Angelo’s journey.

There was no mention of James’ River, but one thing is for sure, on the basis of this tour, when it does eventually drop, it’s going to have been worth every second of waiting.